In 1997, Zender imagined a roadster based on the Alfa Romeo 75 platform.
The result was stunning, but unfortunately, it remained as a concept-car.

After ending his racing career, Hans-Albert Zender started his own company to develop special projects for carmakers. He worked closely with manufacturers such as Volkswagen, Opel, Alfa Romeo, or Ferrari. It aimed to combine styling with performance, and its company succeeded with many projects offered to the carmakers. It was a custom-car maker that dedicated its passion and engineering skills to develop road-legal vehicles and prototypes.

Its front fascia featured small, dual headlights like those installed on the 1993 Alfa Romeo GTV. The entire vehicle featured rounded shapes. Even the door cuts were round and without side windows. In the rear, the taillights resembled those installed on the Fiat Barchetta. On the lower side of the bodywork, Zender designers placed the exhaust in a triangular-shaped hole that poked through the rear apron.

Inside, Zender took its inspiration from glorious former Fiat and Alfa Romeo models, installing the instrument cluster in the middle of the dash panel. The driver didn’t have any gauge, speedometer, or tachometer in front of him. At least, they were tilted to the left.

The Project 5 was conceived as a luxury roadster, and it featured aluminum and leather materials on the inside. Behind the bucket seats, the carmaker installed two safety arches made from polished aluminum. Since the roadster was designed for spirited drivers and not as a daily commuter, Zender didn’t bother to install an automatic transmission or an infotainment system. 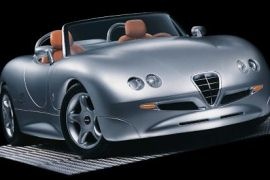