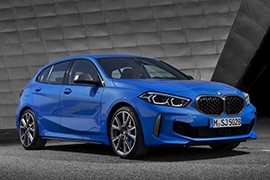 The third generation of the BMW 1-Series was a revolution for the small German car since it was based on a front-wheel-drive platform.
But it didn’t mean it was less performant.

The success story of the 1-Series began in 2004. The sporty, nimble, small car gathered attention from everybody. The second generation was launched in 2011 and it continued the big sales numbers that reached 1.8-million units by the time the third generation appeared.

From first sight, it is impossible not to notice the huge kidney-grille. The angled headlights are going upwards along with the front fenders into a more accentuated slope toward the A-pillars. Since the front-wheel-drive platform was with transverse engines, the whole front of the vehicle was shorter than the one on the previous generation. The shorter front of the car allowed a bigger greenhouse with a long roofline that dropped away toward the rear. A wide tail with big shoulders over the rear wheel arches emphasized the car’s sporty look.

Inside the cabin, there was more room than in the previous generation, since the engine and transmission were in front of the windshield. Since there was more room for the front seats, those were installed forward and in effect, the rear legroom was bigger. The driver had a TFT display instead of the usual dials in the instrument cluster. A new infotainment unit that features gesture controls were installed.

Under the hood, there was a wide variety of engines, both diesel, and gasoline with manual or automatic transmission. For specific engine versions, an all-wheel-drive system was available. 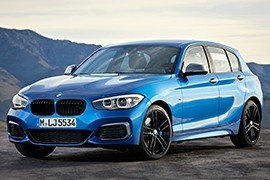 BMW did the last upgrade for the second generation of the 1 Series (F20) in 2017, before changing the generation in 2019.
It is usual for a carmaker to improve a vehicle around the middle of that model’s lifespan, and BMW named that upgrade as LCI (Life Cycle Impulse). It’s like a small bump to increase the sales and dust-off some systems which are no longer trendy among its customers. The 1 Series was the only rear-wheel-drive premium compact hatchback on the market, and the German carmaker bragged about that until it followed the trend and switched to a front-wheel-drive system in 2019.

Inside, BMW finally introduced the touch-screen infotainment system. While the German carmaker was the first to introduce a combined interface that gathered the audio, phone, and navigation into one unit and named-it iDrive on the BMW 7 Series, it waited a while to offer it with a touch-screen system. The sporty interior look was still the same, with very limited room in the rear due to the high center tunnel needed for the transmission.

BMW kept the three-cylinder engines for the base versions on the engine department, but the customers had a vast choice of engines to chose from. Like its predecessor, the 1-Series featured a rear- or all-wheel-drive system. 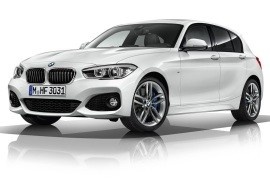 The second generation of the 1 Series from BMW has received an important facelift in 2015.
The BMW installed features like automatic climate control, rain sensor, BMW Radio Professional and the iDrive standard on all the range. The 6.5 inches color display is also standard and integrated into the dashboard. It doesn’t look like it was installed by the dealers afterward.

The long hood, big wheelbase, and short overhangs add a sporty look to the vehicle. And, in the proper versions and with the proper outside option pack, it is not just a look. It is a warning. The kidney-grille got bigger, and as an option, the reshaped headlights can be equipped with full LED lights. The front bumper inspires an aggressive look.

Under the hood, there is a big range of powertrains, with manual or automatic transmissions. For the first time, the 1 Series can be equipped with the 8-speed Steptronic gearbox from the Japanese manufacturer Aisin.
Five petrol and five diesel engines with BMW TwinPower Turbo technology are available for the 2015 BMW 1-Series. Setting the pace in terms of sports performance is the BMW M135i M with an inline-6 engine now producing 326 hp. The most fuel-efficient is the BMW 116d EfficientDynamics Edition, which combines 116 hp with low fuel consumption of 3.4 liters per 100 kilometers (69.1 mpg-US). Customers can also choose the all-wheel-drive system, BMW xDrive, for the BMW M135i, BMW 120d, and BMW 118d. 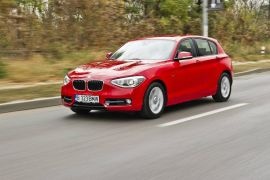 The original BMW 1-Series was introduced back in 2004 and received a facelift in 2007, but it took the world long enough to accept that this was a real BMW.
In 2011, BMW is introducing the second generation of the 1-Series. The Bavarians allowed the 1er to become mature, as they are preparing to introduce a vehicle that will be slotted below it and will use front-wheel-drive. Thus, the car has left behind the rear space issue of its predecessor and tops this with a range of new, downsized, petrol and diesel engines.

First ever BMW M Performance automobile to feature a petrol engine: BMW M135i with a 3-litre, straight six-cylinder engine and 235 kW/320 hp as well as M-characteristic suspension components and aerodynamically optimised body features; Highest level of performance and the most outstanding efficiency within the competitive environment; Typical M-style coherence between drive, suspension technology and aerodynamic balance as well as model-specific interior design for unmistakeable driving pleasure in a compact model; BMW M135i also available as a five-door version. 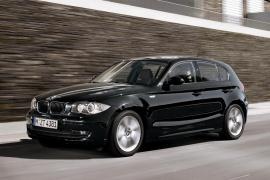 In 2004, BMW introduced a model that changed the entire brand: the 1-Series.
It was considered the true successor for the legendary BMW 3-Series E30 from the ’80s. In 2007 it was enhanced.

The facelift introduced a new bodywork version, a new interior, and new engines. It was a major revamp for the range. Along with the new, three-door version, the entire range was refreshed and updated.

From the outside, the 1-Series with three doors featured a slightly different profile. The longer front doors and the tilting front seats made room for the rear passengers to enter or exit the car. The rear side windows were smaller than on the five-door version. On the front, all the range was fitted with a new grille and a new bumper. The larger kidney-grille was redesigned to improve the air-flow, and, in the back, a restyled pair of taillights completed the image.

Inside, the dashboard changed and the new infotainment system allowed iPod or USB connectivity, but not Android Auto. There was also a button to disable the new automatic start-stop system, which was automatically engaged every time the car was started. For the rear passengers, there wasn’t enough legroom or headroom, especially due to the transmission tunnel. The trunk-space was smaller than all the compact-class hatchbacks on the market.

For the engine compartment, BMW 1 Series offered a choice of eight diesel and gasoline units. Apart from the base diesel unit, which was paired exclusively with a 6-speed manual, all of the others were mated with either a 6-speed manual or a 6-speed automatic. 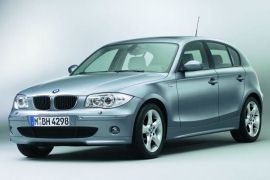 Following a rather disappointing run with the 3 Series Compact model, BMW launched a brand new 5-door hatchback in 2004, called the 1 Series.
This model was based on an entirely new E87 automobile platform and became the smallest vehicle in BMW’s current model range.

It also shared most of its components with the 3 Series (including axle configuration and suspension) and was designed to challenge Audi A3, Volkswagen Golf, Volvo C30, Mercedes-Benz B-Class, Acura CSX and Saab 9-1 on the small luxury car sector. This model received a facelift in 2007, coinciding with the introduction of the 3-door hatch or 1 Series Coupe.