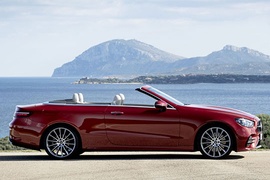 When the E-Class coupe lost its head and placed a canvas-top, it became an E-Class convertible, one of the sexiest cars in the executive-car category.
Ever since 1953, before even the E-Class had that name, the luxurious Mercedes-Benz range was well received by the market. Each time a new generation was introduced, it was a benchmark for its class. The first generation to receive the E-Class badge was the facelifted, 1993, W124 model. The 2020 model was the facelifted version for the fifth generation, which stormed the showrooms in 2017.

Mercedes-Benz introduced the facelift in 2020 with a new set of LED headlights and flatter housings. The diamond-style, 3D design of the grille was enhanced, and the A-shaped lower grille design of the apron amplified the dynamic style. Two powerdomes on the hood evoked a V engine, even if some models received inline-four units. The new LED taillights design and the chromed splitter made the car looks sportier. The canvas-top remained unchanged.

The interior received a new technological update for the infotainment unit with the MBUX system. It was fitted with two 10.25” screens arranged side by side under the same glass-panel. There was an even bigger, 2x12.3” screen option. The new steering wheel with capacitive touch-areas to control various systems installed on the car enhanced the driving experience.

To lower the emissions, the four-cylinder engine received an integrated starter-generator (ISG) and a 48v architecture. A recuperation function and the ability to “glide” with the engine switched off made the engine even more efficient. The electrification continued on all the gasoline engines as well, and the only gearbox available for the entire range was the 9G-Tronic (dual-clutch) automatic. 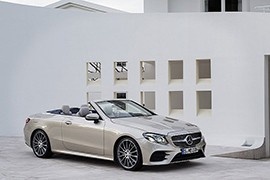 The 2016 Mercedes-Benz E-Class Cabriolet was the open-top version of a two-door car based on a four-door sedan and it offered truly four seats.
The recipe was simple and it was used since mid-2000. Then, the CLK cabriolet was built on a W203 C-Class chassis, with styling from the E-Class. As the time went by, the following generation of the CLK kept the same recipe (and same W203 chassis) but without the E-Class elements for the outside. Only some interior elements were taken. After that, the Mercedes-Benz decided to build the E-Class cabriolet, based also on a C-Class platform.

The styling was from the E-Class coupe, which was a normal thing to do. The E-Class coupe was one of the most beautiful vehicles in its class, at the time of launch in late 2016. The exterior look was complemented by LED headlights and slightly sculpted door panels. It didn’t feature the muscular shoulders on the rear fenders as before. This transformed the car into more of a luxury cruiser instead of a sporty open-top vehicle.

Inside, the luxury was the key element. The new dashboard with big screens instead of an instrument cluster with analog dials plus an infotainment unit brought a modern look for the car. Like its predecessor, the 2016 E-Class Cabriolet offered four seats inside, with the air-cap system on top of the windshield to allow open-top cruising without damaging the hair-style of the rear passengers.

Under the hood, the car-manufacturer installed both diesel and gasoline engines. While some are considering that a diesel engine was not proper for a convertible, others just liked the range and better fuel-efficiency. 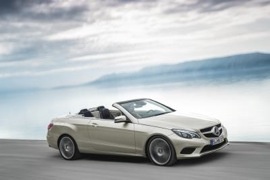 The 2014 Mercedes-Benz E-Klasse Cabriolet comes with fresh styling which is combined with the new sophisticated assistance system part of Mercedes-Benz “intelligent drive”.
The system includes new technology that avoids crashing with other vehicles or pedestrians as well as an upgraded Active Lane Keeping Assist system. The look has been refreshed by the redesigned front fascia, with new headlamps that feature LED lightning as standard while keeping the typical “four-eye” look of the E-Klasse. Designers have played a little with the proportions too, the convertible having a longer pointed nose, beefier rear wheel arches and a flat roof. The restyled interior features fine materials and two-piece trim stretching across the entire dashboard. Technical features include a three-spoked steering wheel with Direct Select shift lever and shift paddles, AIRCAP system to reduce air turbulence when the top is down and the AIRSCARF neck-level heating that allows the car to be driven top down even in colder weather. 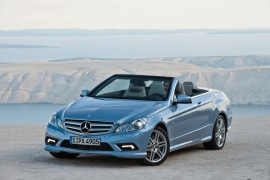 The Mercedes-Benz E-Class Cabriolet was introduced in 2009, as the last body version for the E-Class.
It was the fourth model in the family, after the sedan, station-wagon, and the coupe.

After two generations for the CLK, a model that was based on the C-Class with E-Class styling, the Mercedes-Benz decided to launch a proper E-Class convertible based on a proper E-Class coupe. And the features of the E-Class Cabriolet were among the top in its class.

The styling of the E-Class coupe was carried over to the open-top version. The sharp headlights, raked A-pillars and rear shoulders over the fenders were styling elements that were appreciated by the customers. The whole car looked classy, yet modern.

Inside, the E-Class Cabriolet featured unique features for its class. Besides the heated seats it had the “Air-scarf” innovation. Warm air was blown on the front-seats occupant’s necks so they won’t feel the cold air. Another innovation was the Air-cap system. As soon as the rear passengers were placing their seatbelts on, a wind deflector popped out from the top of the windshield and the air was diverted behind the cabin. At the same time, a pop-up wind-deflector appeared behind the rear seats.

For the engine compartment, Mercedes-Benz installed various engines, including turbodiesel versions. That was hard to accept by conservative convertible users. But the vehicle was very fuel-efficient and its performance was decent. 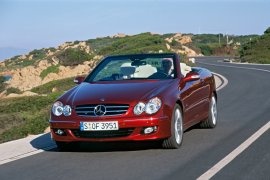 Mercedes-Benz refreshed its CLK lineup in 2005 for both versions: the coupe and the convertible versions to comply with the Euro 4 emissions regulations.
Along with the facelift, the car received some changes in its look.

The three-pointed star brand didn’t have a proper E-Class convertible after it retired the W124 version in 1997. It replaced it with the CLK, which was based on the C-Class platform but with design elements from the E-Class. In 2003, the carmaker introduced the second generation of the CLK, which was facelifted in 2005.

The 2005 model kept a similar shape for the headlights, with twin rounded lamps on each side. Compared with the 2002 version, they had clear lenses. The grille received three slats instead of four as on the non-facelifted version. The taillights were redesigned as well. Both bumpers received a new design. Its black soft-top featured a defrosted glass rear window.

The interior was enhanced by introducing the new COMMAND 2.0 infotainment system, which featured a DVD-based navigation system. It also allowed an iPod integration via an external port installed in the glove compartment. The center stack design was modified, and the former commands carried over from the C-Class were replaced with newer ones.

Under the hood, the CLK was offered with a choice of gasoline and diesel engines ranged between 150 hp and 388 hp. Apart from the base engines (150 hp diesel, 163 hp, and 184 hp gasoline units), all the other versions received the new 7G-Tronic gearbox. 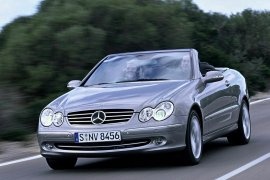 The second generation Mercedes-Benz CLK came in 2002, and along with that there was a new cabrio model introduced in 2003.
The new CLK Cabrio is built on the same period new W202 C-Class platform, coming with rack-and-pinion steering, a three-link front suspension, and a rear multi-link one. The car is also 61 mm longer, 18 mm wider, and 28 mm higher than its predecessor. The soft-top comes with a remote-operated system and sensor-triggered roll bars that pop up in case of roll-over. Other features include Tele-Aid emergency system, auto dual-zone air conditioning, 10-way power seats, automatic wipers, and seven-speaker sound system. 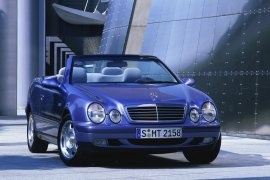 Mercedes-Benz delayed three years introducing a replacement for the C124/A124 models, but when it finally unveiled the C208/A208 range, the customers were satisfied.
The German premium carmaker had a long, uninterrupted history in producing mid-size open-top vehicles. When it introduced the 1995 E-Class, the customers hoped that the coupe and the convertible would follow in 1996. Yet, they had to wait until 1998, when the three-pointed-star brand unveiled the CLK. It built it on the same platform as the first-generation C-Class (W202), but with E-Class styling.
Mercedes hired Michael Fink to design the new range. He installed an E-Class-inspired front fascia with similar dual-headlamp headlights and a tilted, four-slats chromed grille between them. The bumper sported a smiling-shaped lower grille and a pair of fog lights. From its sides, the raked and thick A-pillars served as a safety-arch as well. Thus, the carmaker didn’t have to install an additional protecting arch behind the front seats. The power-operated top was covered in the back by an integrated tonneau, which completely hid the soft-top when retracted.

Since it was based on the W202 platform, which featured a shorter wheelbase than the E-Class sedan, the A208 couldn’t offer the same interior room. Moreover, to accommodate the folding roof behind the cabin, the rear bench had to be moved forward. That led to limited rear legroom.

The engine lineup ranged between a 136 hp inline-four and a 275 hp V-8. Apart from these, Mercedes-Benz offered an AMG version with a 5.5-liter V-8 unit. 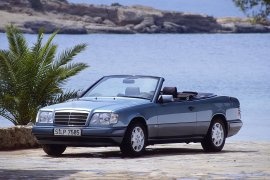 Few cabriolets made it to the US after 1995 with the 3.2 L version having been retired. Asides a few minor styling adjustments and engine tweaks, the car was left unchanged. Two years after the facelift, all CE cabrio models would cease production an eventually be replaced by the E 220 and E 200 models. Rare today, especially the right-hand drive E 36, only 7 of whuch have been made, the cabrios are still a popular choice among collectors, particularly because of their iconic status of having been some of the last-good built full size sports cars. 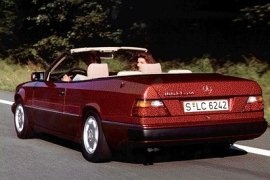 After eight years on the market, the E-Class W124 received a long-awaited convertible version in 1991 as a 1992 model year.
The W124 was one of the most appreciated cars ever made by the German carmaker, and it was produced between 1984 and 1997 in various forms. But Mercedes-Benz didn’t want to gamble against the market and waited a long time before it dared to introduce the convertible version. It was unveiled in 1991 and produced until 1997. It was the open-top version of the Mercedes-Benz CE coupe, which was released in 1987.

The connection between the convertible and the rest of the range was obvious at the front side, where the big, rectangular headlights and the slightly raked chromed grille were specific for the entire range. Mercedes-Benz tried to make the car look elegant yet sporty, and it did it. The thick A-pillars and the retractable roll-over protection bars behind the rear seats confirmed that the vehicle didn’t need a C-pillar or a safety arch.

Inside, the carmaker tried to fit four adults in the cabin, but that was debatable. Suppose the driver was taller than there was no legroom left for the rear seat passengers. Since Mercedes-Benz succeeded in hiding the canvas-top behind the bench, that was moved forward and resulted in limited rear space.

Under the hood, the carmaker carried over three engines from the coupe version and installed them under the hood. All three were available with either a manual or an automatic gearbox.