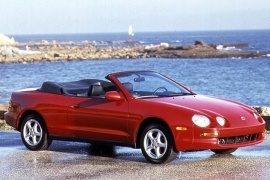 While its hatchback sibling enjoyed the rally-fans appreciation, the open-top version offered a different, relaxing experience.
Like its predecessor, the 1994 Celica was offered in two body styles: a hatchback or a coupe. In the following year, the Japanese carmaker introduced the open-top version, which was not meant for high-speed runs or rally-stages. Still, it was fast enough not to embarrass its rally-winner sibling.

Compared with its predecessor, which featured pop-up headlights, the 1994 Celica featured four rounded headlights and no grille. The side fluid lines were typical for the biodesign era when the car was designed. It was slightly longer than its hatchback sibling to accommodate the roof when it was retracted behind the rear seats and still leave some luggage space left in the trunk.

Inside, there were four seats installed, but the rear knee-room was very limited. The interior featured a driver-oriented dashboard with a tilted center stack and high-bolstered front seats. Toyota fitted the car with dual airbags for the front occupants, but the ABS was optional for the trim level. The air-conditioning was fitted as standard on the GT trim levels.

Under the hood, Toyota offered only one engine option, a naturally aspirated 2.0-liter four-cylinder that provided 175 hp. It was impressive for those times. It sent the power to the front wheels only via a five-speed manual. 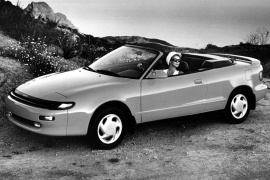 Toyota offered the Celica with a canvas-roof since the second generation and saw no reason not to cut the roof for its famous coupe’s fifth sequel.
By 1991, the Celica was already known for its performance, but the regular customers liked it for its on-road handling and as a great daily driver vehicle. Not all of them were the turbocharged versions with all-wheel-drive systems, and some customers enjoyed the car in the open-top version and front-wheel-drive.

The facelifted version featured a restyled bumper with a narrower grille at the bottom and exposed fog-lights. It sported the new elliptic Toyota logo on the hood and trunk, which replaced the former one with lettering. Its front fenders lost the turn-signals installed between the doors and wheel-arches area, and in the back, it showed smoked surroundings around the taillights. Like its predecessor, the car didn’t need any roll-bar above the B-pillars.

Inside, the Celica offered room for four adults with a pair of bucket-seats at the front and a bench profiled for two in the rear. But, since the legroom was minimal, those were used mostly as a storage area.

Under the hood, the carmaker installed only a naturally aspirated 2.0-liter four-pot engine that provided enough power to make the car moves decent. It wasn’t a car built for speed or going sideways around the corners.